Attorneys have to write. A lot. Writing for judges, colleagues, clients and blogs requires a different tone and level of formality depending on the audience. Online writing can be much less formal than official writing — sometimes throwing in an occasional, intentional grammar error is ok. Blog entries should be conversational enough to hold a visitor’s attention, after all. But conversational does not mean sloppy. You are trying to be an authority, and repeating routine grammar errors works against you.

Here are five of the most common grammar mix-ups made by writers of all levels.

1. Who and whom: Whom is an infrequently used word, and grammar geeks debate whether it will survive into the future of the English language. For now, however, whom exists, and certain situations call for its use.

Who wrote this brief? Who is the subject of the verb wrote.

David is the one who wants to move the meeting to Monday. Who is the subject of the verb wants.

I noticed the woman who made the statement was nervous. Who is the subject of the verb made.

To whom should I address this letter? Whom follows the preposition.

Jessie gave the project files to whom? Whom follows the preposition.

John is the man whom you met at the conference yesterday. Whom is not the subject of the sentence but rather the object that receives the action “met.”

2. Me and I: According to Theda Snyder at attorneyatwork.com, always using I does not make you sound intelligent or cultured. Some people incorrectly use I because it seems like a more sophisticated pronoun than me. It is not; always using I is simply incorrect.

The best way to test for correct pronoun usage is to remove the other names from the sentence and see if it still makes sense.

Josh sent the video to Susan and I.

The pronoun I should be used only as the subject of a sentence, like I will, I can or I did do something.

3. Which and that: Which and that are often used interchangeably, but they are not the same word. That can only be used when it is essential to the noun to which it is referring. That is restrictive, meaning a sentence or clause would not make sense without the information following with word that.

Example: The table that we bought last week is wobbly.

This sentence implies that we have more than one table, and only the one we bought last week is wobbly. We can only be referring to that specific table.

Which precedes qualifiers that are non-essential.

Example: I would rather buy sturdier furniture, which is available at several local stores.

You can get sturdier furniture from many places, so this sentence needs the qualifier which rather than the restrictive that.

Which will always follow a comma when being used as a qualifier, whereas that does not require a comma.

4. Moot: Moot is an often misused word. When something is moot, it is still subject to debate, dispute or uncertainty. The final answer is not yet determined. Many people use moot to mean extra or unnecessary. A moot point is a point that is still open to discussion, not one that is redundant or superfluous.

Place the clause being modified next to the appropriate word. This sentence can be rewritten as, “The manager removed the bikes that had been left unattended for days.”

Copybolgger has a good infographic covering 15 of the most common grammar mistakes, including the infamous it’s vs. its and affect vs. effect. 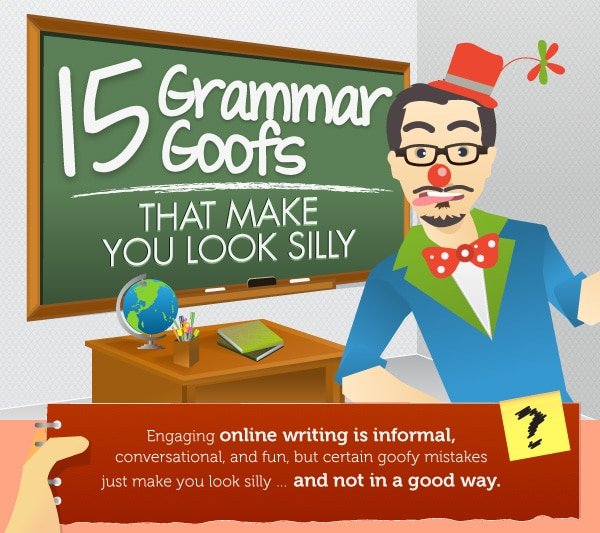 Kristen Friend holds two bachelors degrees from Indiana University and an associates degreee from the International Academy of Design. As Art Director for Custom Legal Marketing, her work has been awarded Webby Honorees, WebAwards, Davey Awards, Muse Awards, W3 Awards, and many others. She is also a contributor to Entrpreneur Magazine through the Entrepreneur Leadership Network.
Tags: grammar, grammar mistakes