When it comes to search engine results pages (SERP), diversity is important. Diversity gives the user the opportunity to find the information or services that are more tailored to their specific needs. Having one domain dominate the SERP might not give the user the best quality result they are looking for.

Changed on June 6th, Google has stated that moving forward, only two listings for the same domain and sub-domain will be shown per page for most search queries. 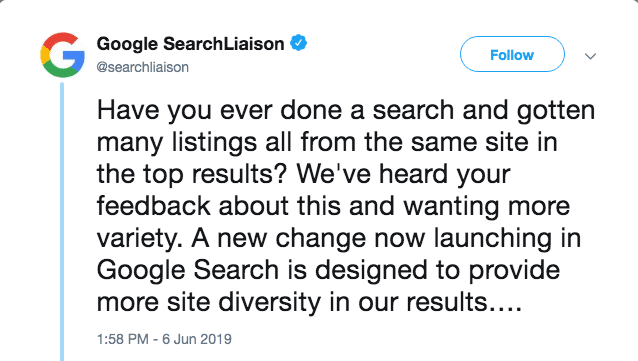 This change will only affect organic listings; your domain would still be eligible to show additionally via featured snippets, image carousels, top stories among other features available on Google Search. Branded search queries will not be affected by this change.

After this change was announced, Moz went ahead to test the validity of the diversity update and found that the implementation was minor, but did take effect. Using ten thousand keywords as their data set, Moz looked at the differences in unique domains on page one of Google’s SERP. They found that the change was incredibly small, about a 0.49 percent bump in domain diversity. They then looked at SERPs that had an 80 percent website diversity, meaning eight out of the ten domains shown on the SERP were already unique to that page and found a 2.1 percent improvement in unique domain listings. Lastly, Moz found that unbranded search queries with commercial intent still had SERPs with more than two listings with the same domain. They found that after searching for commercial products, retailers like Amazon still heavily populated on the SERP. This goes to show that the change Google made is not perfect, but surely they have been continuously working on improving the diversity of the SERP.

The change in domain diversity can be a welcomed sight for law firms looking for visibility on the SERP. Aggregate and directory websites such as Yelp, FindLaw, Avvo and Justia used to have more than two listings on particular search queries pertaining to law and lawyers. This diversity change was not a part of any search algorithm updates, meaning a law firm website’s rankings were not affected in any way. This will give highly-scored sites the ability to appear on the first page of Google’s SERP, not hindered by aggregate and directory websites dominating search queries used by people looking for attorney services.

Dexter Tam is an Analyst at Custom Legal Marketing and is Google Partner Certified in Adwords.