Most people know that false information runs free on the internet. However, revelations about the sheer volume of misinformation, and the cultural influence of fake news specifically, have shocked and outraged many in the months since the U.S. presidential election in November.

What distinguishes fake news from the plethora of speculation and conspiracy theory discussions online is that it sells itself as professional journalism. Fake news tries to make itself look real, as do fake ad hosting sites, when the objective of both is simply to make as much money as possible off of their respective scams. Fake news is intentionally false and misleading for the sake of getting attention.

Fake content presents a challenge to law firms, marketers and arguably, society as a whole. It will not disappear soon, even with large companies like Google and Facebook looking to filter or tag fake stories. Fake information will likely continue to proliferate in 2017, given its success and profitability to date.

False information can be used to manipulate human behavior in very real ways, sometimes as innocuously as eliciting a few likes and tweets, but sometimes at great cost. In what has been dubbed the Methbot campaign, a group of Russian individuals managed to make $5 million a day by selling ad space on fake sites. The group registered hundreds of urls, then produced hundreds of thousands of fake viewers — the actions of which mimicked those of real humans — to convince marketers that their ads were being seen. According to security firm White Ops, the Methbot scam is the biggest digital ad fraud ever.

Additionally, as online information exposure increases, people are losing the ability to determine the veracity of online content. A Stanford study, Evaluating Information: The Cornerstone of Civic Online Reasoning, showed many that students, from middle school to college aged, have difficulty verifying information on both informational websites and social media platforms.

And fake news can also affect real-world actions, both sensationally, as revealed by the Pizzagate incident, and in terms of whether or not consumers trust a brand. Trump supporters, for example, vowed to boycott PepsiCo in the wake of a fake story about its CEO’s political leanings. The harm done to reputations is real, regardless of the truth of the allegations.

The proliferation of fake content impacts marketers and law firms in several ways. Consumers already look at online marketing dubiously. In a marketing study published by MarketingSherpa in December, print, TV, direct mail and radio ads all scored as more trustworthy than online banners and PPC text ads. A Nielsen Trust in Global Advertising study came to a similar conclusion.

It is particularly difficult for law firms, the motives of which many consumers already view skeptically, to come across as genuine in their marketing. If consumers become even more uncertain about the accuracy and credibility of online content, local businesses, like law firms, that are trying to break through and receive attention with honest content will have a harder time. It is tempting to jump into the fray with highly sensationalized or even misleading headlines, but the lasting damage to your reputation will likely outweigh any short term gains.

In terms of paid advertising, fake users threaten firms’ ability to measure the success of campaigns. As fake bots continue to behave more and more like people, it may become harder to accurately measure what paid marketing is and is not being wasted on fake eyeballs.

All the news you want to know

What may begin as just a few shares can quickly avalanche into a highly influential viral story. An analysis performed by BuzzFeed the week after the U.S. election showed that fake news outperformed stories posted by traditional media outlets like the New York Times and the Washington Post on Facebook. Headlines that claimed Hillary Clinton sold weapons to ISIS or the Pope endorsed Donald Trump were wildly popular; they confirmed preconceived biases people already had.

Facebook has taken the bulk of the criticism for permitting the spread of potentially influential fake news, but it is by far not the entire problem. The underlying problem lies in both human nature — our inclination to believe what we already think is true — and the workings of social media. It pays to be popular, and things that a certain group of people want to believe are true are by their nature popular.

People will also often share without reading a story. According to scientists at Columbia University and the French National Institute, almost 60 percent of all the links shared on social media have not actually been clicked. A sensational headline is all it takes to for fake facts to take over a newsfeed.

There is not a quick and easy way to combat misinformation. However, awareness can help you avoid problems and push back.

One person displaying a strong emotion can influence a whole group. Conversely, the general mood of a larger group can lift of lower the spirits of a single individual. This is the phenomenon of emotional contagion. We tend to be tuned in to the feelings of those around us.

People also are not good at being objective; most make decisions based on emotion. Therefore, one of the best tactics for establishing trust is building positive associations with your firm. Engage online, reply to comments and reviews when appropriate and share others’ content. Try in all interactions (online and off) to convey the feeling you want people to associate with your firm. It will eventually become a self-fulfilling reality.

2. Be an authority from the first impression

The fact that people make snap judgements based on appearance is a well-documented occurrence. What used to be a biological necessity is now a psychological holdover that can cause people to act in ways that are actually against their own interests.

Although humans’ tendency to judge quickly may no longer be ideal, it is a reality. And your firm should take advantage of it. Establish yourself as an authority from the beginning by having a consistent, professionally branded online presence. Everything from your website to photography to social profiles to review site listings should have the same look and feel — and it should scream authority.

3. Take advantage of the fact that people like to talk about themselves

Testimonials are one of the best social trust signals your firm can have. People tend to believe that they will have the same experience others have had for any given situation.

Fortunately, people like to give feedback. In various studies, between 70 and 90 percent of respondents say they would leave a review if asked. They key is asking clients the right questions.

Also fortunately, people really like to talk about themselves. Talking about oneself activates the same pleasure centers in the brain as food and money. In fact, studies have shown that people are willing to give up money in order to experience the high of talking about themselves.

So, when collecting testimonials, ask people about themselves rather than asking about your services. Frame the question in terms of how working with you affected them. For example: How did working with our firm make you feel? In what ways did our services positively affect your life? When you frame questions from the client’s point of view you are more likely to get a good response.

In addition to creating a generally positive, authoritative and trustworthy law firm brand, there are specific things you can do that will help increase visitors’ trust in your firm and your online content.

Make sure any pictures on your Google My Business profile and other review sites like Yelp are recent and high-quality. Low-quality or outdated pictures can do more harm than good.

One of the best ways to build authority is old-fashioned networking and community involvement. Sponsor events, talk to journalists, give seminars and meet people face to face. You can then promote this activity online, for a double marketing impact.

Provide facts, cite sources and avoid asking too many open-ended questions. If you find yourself using statements like “some people say,” you should probably be doing a little more research. And do not over exaggerate or over-sell. There is a difference between marketing and hyperbole; over-hyping erodes trust.

It’s true that hyperbolic, click-bait gets likes and shares. However, the majority of the people who like and share these articles do not actually read them. These people are not going to become leads; the engagement is superficial. Providing interesting, authentic content with honest headlines is more likely to build a client base. Write headlines that will attract the readers you want. 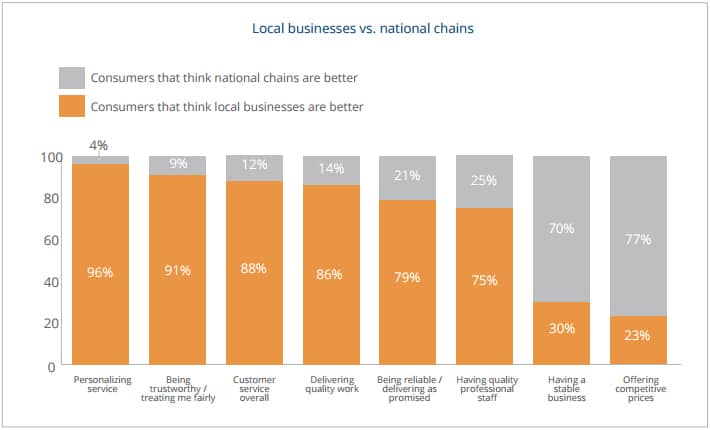 Remember, closing off discourages trust. Be open and authentic whenever you can.

Kristen Friend is a 1999 graduate of Indiana University, with Bachelors Degrees in both journalism and religious studies. In 2003, she graduated from the International Academy of Design. She is a contributor to the Bigger Law Firm magazine, and is the Art Director for Adviatech (Custom Legal Marketing's parent company). When she isn't making law firms look their best, Kristen can be found hiking up Mt. Tamalpais or inventing gluten free baking recipes.
Tags: authority, content, credibility, headlines, news, online marketing, photos, research, social media, social profiles, trust